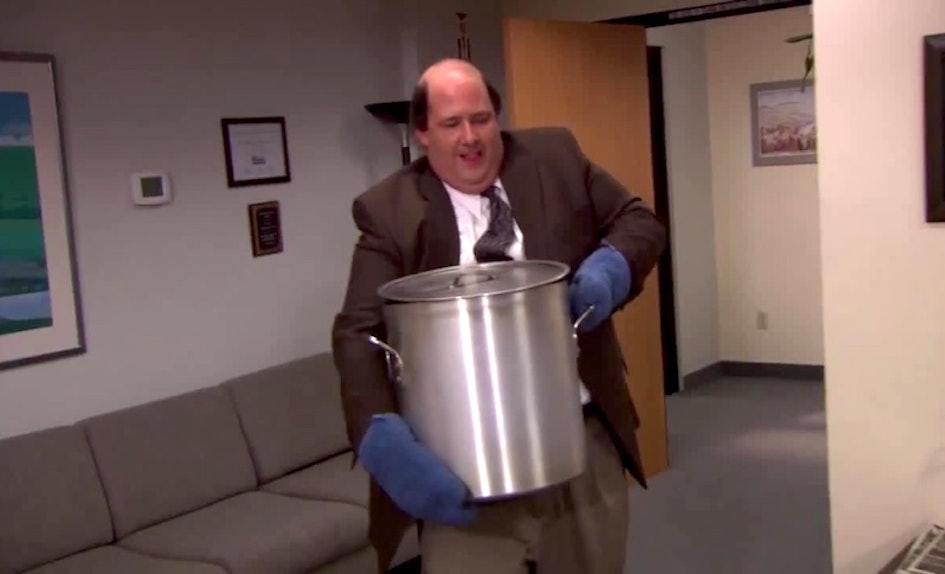 Inspired by none other than Kevin Malone. Hope I made you proud, Kev.  I present to you Eric’s Kevin’s Famous Chili.

The recipe I “followed” was from Delish.  I’ve had a can of both black beans and pinto beans collecting dust, so I elected to use those instead of kidney beans.  Picked up some carrots and bell pepper to add as well.  And I added probably a teaspoon of crushed red pepper for some heat.  I was also de-briefed by my lovely mother who makes an excellent Turkey Chili.  Shout out to my mom, commonly known by her government name “Mom”.

I diced up half an onion, cried all over my cutting board, and finally left the room “for some air”, I thought to myself.  The dicing continued with two (2) big carrots, one (1) green bell pepper, and three (3) cloves of garlic.  “Wow, look at those knife skills”, I thought to myself.  They went into the Dutch oven in that order by the way.  For the most part, I followed that recipe pretty closely, at least in terms of order.

During the simmer phase, my one taste test revealed that it may have been too spicy.  I added some more tomato paste because that’s all I had still out on the counter.  I think it worked too.  Evidently chili thickens as it simmers, so I planned on taking advantage of that.  Personally, I prefer a thicker chili with some more texture to it.  Once I turned the flame down, it simmered for 45 minutes give or take.  Had my friends not come over to try it, I would have let it sit even longer.  They were impatient, and I was anxious to see the results for myself.  They cleaned up after themselves but did not leave a cash tip.  Very rude.

Overall I was incredibly happy with the way it turned out.  There were sweet, savory, and spicy elements that danced harmoniously like Steve Stifler and that big buff guy at the gay bar in American Wedding.  As the wise Kevin Malone said, “Everybody is going to get to know each other in the pot”.  I liberally topped my bowl with a dollop of sour cream, green onions, cheddar cheese, and oyster crackers (obviously).  “Damn those colors really pop!”, I thought to myself.  All in all, no major complaints.

What would I change for next time?

I would have waited longer to shovel a monstrous spoonful into my mouth because my tongue is so burnt that I won’t be able to taste foods for 48-72 hours.

Also, I would absolutely use kidney beans next time.  The black beans can stay, but the pinto beans didn’t do much for me.  Maybe they’d suit a Turkey Chili better.  Who knows?

More garlic, maybe?  I’m not sure how much a difference another clove would make, and I wouldn’t want to add more than that.

For my first go at a chili, I’d say it was a job well done.  It’s a surprisingly low maintenance meal to make with very little prep and even less clean up.  You can do so many things with chili that there really are no rules.  The best part is that I had 2 servings, fed 2 of my friends (The Roommate would never eat this), and still have 2 more servings for the next few days.  Again, I won’t be able to taste them, but they’ll still be lunch/dinner.