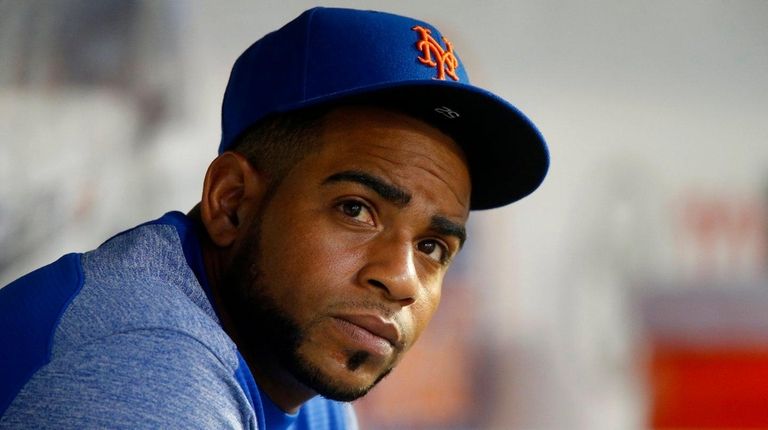 Even by Mets standards, last night’s sequence of events was strange.  The Mets beat up on the Yankees, which always feels good.  It was Robert Gsellman who got the ball in the 9th inning instead of closer Jeurys Familia; it’s clear a trade is imminent.  As the game ends, word surfaces that he is, in fact, expected to be moved.  Nothing final, but I’ve heard a deal might be in place with Oakland.  Nonetheless, we’ve seen Mets get traded and untraded before (Wilmer Flores).  All jokes aside, Familia is on his way out.

In his post-game interview, Yoenis Cespedes casually dropped a bomb on reporters that he finally pinpointed the root of his injuries.

Cespedes says that the cause of his medical issues is calcification in both heels. He says the only way to fix the issue is surgery. He’s considering it for the off-season, but the recovery time is apparently 8-10 months.

Belaboring over Yo’s chronic injuries is exhausting, and frankly I don’t want to head down that road.  I will only say that it’s getting worse and worse seemingly, and the Mets are the ones left with the bill at the end of the night.  With that being said, this was announced way too informally.  This is major news.  And the Mets decided to let Yoenis Cespedes announce it on his own VIA TRANSLATOR after the game.

Yoenis Cespedes has been on the Disabled List for 2 months.  It was an arduous journey to get back to “full” strength.  At some point, the Mets found out that he needs surgery to fix his heel issues.  This means that the Mets either forced, encouraged, or signed off on Cespedes rehabbing and playing despite a necessary surgery.  Does anyone in Flushing know how calendars work?  An 8-month recovery would put Yo on track for Opening Day 2019.  10 months is mid-May.  What the fuck are they doing?  I’m not saying they’re forcing him to play, though there is a long documented history on the Mets doing exactly that.  But come on with this.

The 2018 season has been in the toilet for months already.  There is ZERO rationale behind playing Yoenis Cespedes if he does need surgery that’ll require 8+ months recovery time.  This is stupid.  This is irresponsible.  THIS IS MALPRACTICE.  When does it end?  When are the Wilpon’s held accountable?  The “wait and see” methodology with the Mets is so goddamn negligent.  They wait and see if the team is good to decide whether they want to invest or sell.  They wait and see how injuries heal to take the next course of action.  The only decision here is to DL Cespedes, get him going with surgery, and look ahead to 2019.  These motherfuckers want Yo in the lineup for what?  To sell tickets?!  Nobody’s going.  Fuck you.  9am on a Saturday and boy am I heated.

Jenrry Mejia (remember him?) Gets Conditionally Reinstated From His MLB Lifetime Ban, Can Re-Join Mets