Forgive me on the delay here.  Rather than rushing to get a Harvey blog written late last week, I needed the weekend to get organized because Matt Harvey has played a fairly pivotal role in my sports fandom over the last 5 years.  It’s been a tumultuous kinship between him and all parties.  The highs were amazing, the lows were excruciating, and it’s all over now.  Matt Harvey’s days in a Mets uniform are over.  I’ve got mixed feelings about it but overall I’m happy about the end of a toxic relationship.  Let’s break it down.

The come up was unlike any I’d ever seen with the Mets.  The buzz around Harvey before he even made it to the big leagues was insane.  When he finally arrived, we were given everything we were promised and more.  Man, this guy was dominant.  2012 was the first taste we got of the soon-to-be Dark Knight, and it tasted real good.  This man started the All Star Game in 2013 at Citi Field.  What a moment for him and Mets fans, watching him toe the rubber at home representing the National League.  And who can forget his bloody nose one-hitter against the White Sox?….

But even then, we couldn’t enjoy the good times for too long.  His 2013 season cut short and was set for the dreaded Tommy John surgery, missing all of 2014.

Goes without saying, but 2015 was a year to remember.  It was not all positive though.  If you remember, Matt Harvey had a soft innings limit and even said he was considering not pitching in the post season.  He was a no show at practice around playoff time.  Scott Boras was stirring the pot, that motherfucker.  Innings limit.  Innings limit.  Matt Harvey ended up pitching more innings than anyone ever in their return from TJ surgery.  And it was (almost) worth it.  NL East Champs.  Beat the Dodgers.  Swept the Cubs.  NL Pennant Champions.  Never in my life did I think I’d see the Mets play in the World Series, and Matt Harvey almost cemented himself as a New York sports legend with his performance in Game 5.  Almost.  But I wouldn’t have changed this moment for anything.

I remember sitting in center field as my phone started to blow up.  We couldn’t see what was developing in the dugout, which was Matt Harvey refusing to come out of the game.  Who didn’t wanna see Matt finish this thing off?  Let’s fucking go.  I’ve never heard a stadium as loud as that moment he emerged from the dugout and sprinted to the mound.  Obviously it didn’t work out.  We can blame Matt Harvey, we can blame Terry Collins, we can blame Lucas Duda, but the bottomline is Harvey and Co. couldn’t get it done.  Harvey would have been a legend forever had he finished that game.  The city would be his forever and always.  Even if the Mets didn’t win the whole thing, that single performance would be one we tell our children and our children’s children about.  A legend would have been born.  A man that has wanted stardom would have earned it all.

But that was the last we’ve seen of the Dark Knight.  Since then, it’s been Matt Harvey; and that person stinks at baseball and isn’t all that likable as a human being either.  And that’s the thing with Harvey; he’s always had an edge to him and a “fuck you” personality, but that’s only well and good if you’re contributing.  When you don’t play well and act like a dick, it’s annoying and distracting. 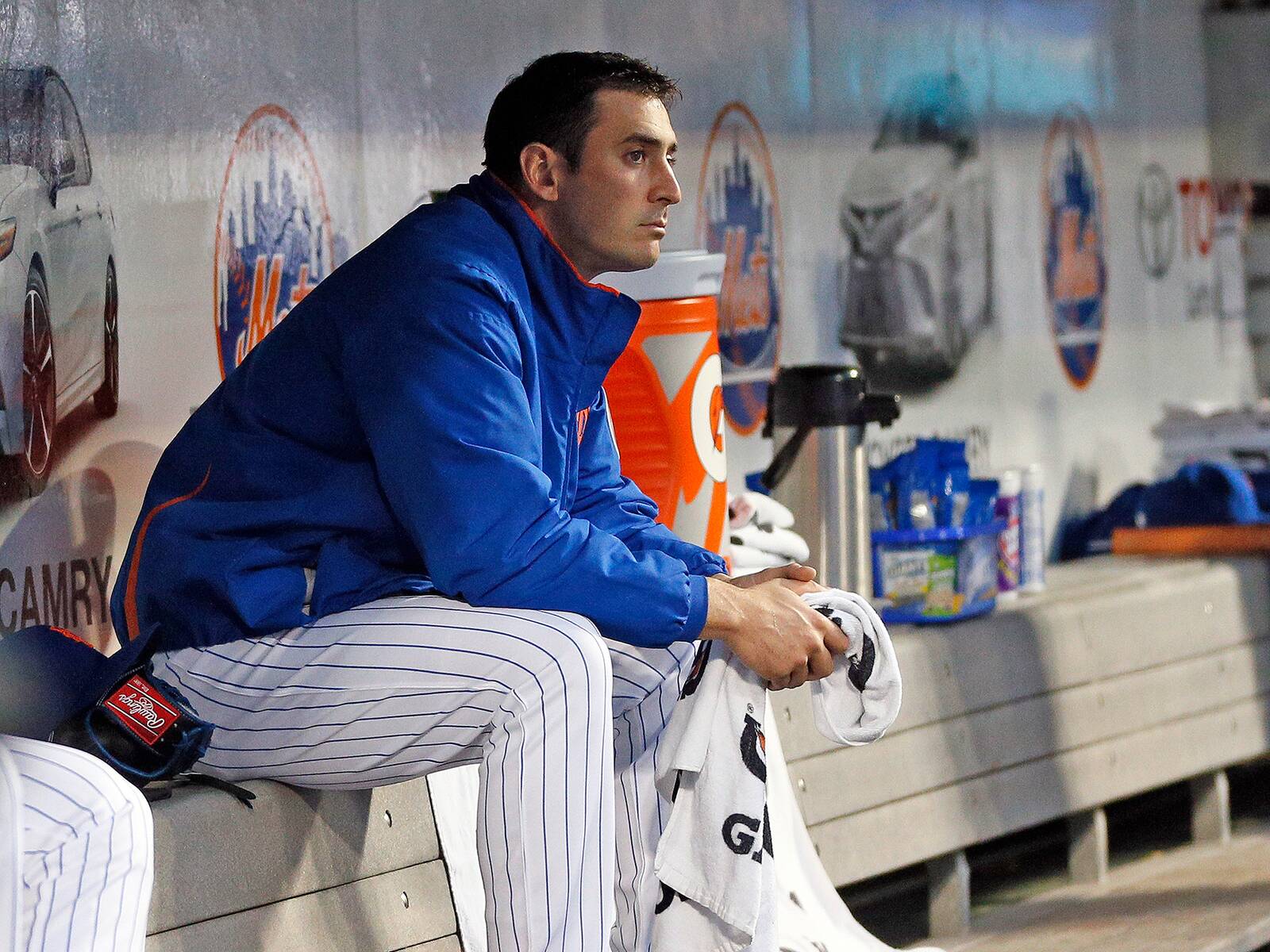 2016 Matt Harvey was the first major warning sign.  In his first 3 seasons (2012, 2013, 2015), he posted, respectively, 2.73, 2.27, and 2.71 ERA’s.  In 17 starts in 2016, Harvey went 4-10 with a 4.86 ERA.  In mid-July his season was, again, cut short.  He was set for surgery to address Thoracic Outlet Syndrome.  It’s an uncommon “injury” with an alarmingly low number of success stories in sports.  Maybe it was a result of Harvey exceeding his 2016 innings limit.  Nonetheless it was another disappointing blow for Harvey and the Mets.  Injuries are unfair but unfortunately commonplace in sports and baseball especially.

The start to 2017 was promising for Matt Harvey and that quickly went to shit.  He pitched to a modest 6.70 ERA in 18 starts.  There was one bright side.  2018 was going to be his contract season.  If he was going to right the ship, it would be in 2018 so he could get his money.  If he’s bad, him and the Mets part ways.  If he’s good, it’s a win-win.  Harvey potentially resurrects his career, gets his big paycheck in free agency, and the Mets are the beneficiaries of Harvey’s success.  I don’t think many were expecting a big bounce back year (i.e. 2015), but it’s not uncommon to see guys flourish in the season leading up to hitting the FA market.

Not quite.  The Mets jumped to a HOT start this year.  The 11-1 run to kick off the year is all but gone, but we won’t break that down today.  That’s an entirely different conversation.  Harvey wasn’t stellar but the Mets were winning.  And when you’re winning, it’s easy to look past any errors and shortcomings.  I remember watching Harvey’s first start of the season.  In fact, I watched every pitch intently and was somewhat encouraged in his outing (5 IP, 0 ER, 5K).  He wasn’t awe inspiring by any means but I took it as a positive start that he can build on.  He’s been hot garbage since then with each outing more annoying than the last. Every time we saw Harvey pitch was worse than the time before.  It got so bad that he lost his job as a starter.  The Mets gave him two options.  The first was to move to the bullpen and try to correct his stuff and pitch in shorter situations.  The other was the remain as a starting pitcher but out in Las Vegas; get your shit together against minor league hitters and rebuild that confidence, at which point you’ll be ready to come back and do the same against big leaguers.  Harvey reiterated that he is a “starting pitcher” but declined Vegas anyway.

He stunk in the bullpen.  He stunk in the bullpen and wasn’t man enough to own it.  His first outing as a reliever was bad; he entered the game with a lead and surrendered that lead in 2 innings of work.  The Mets won the game, but Matt Harvey refused to talk to the media after the game.  He couldn’t own his mistakes even after a victory!  When asked about it the next day, he was none too pleased…

Harvey was asked why. "I have nothing to say to you guys," he said.

He was asked why not. "I dont [expletive] want to," Harvey replied.

The 3 relief appearances to follow were no better, with the final being a 2-inning 5 ER debacle.  It was getting worse and worse, and the Mets had had enough.  I was done with him a long time ago.  But when Harvey refused, again, to go down to the minors, that was the coup de gráce.  DFA’d.  I actually agree with the logic in Scott Boras’s statement regarding the refusal to be optioned to AAA, and the Mets probably weren’t surprised, but it really was so perfectly Matt Harvey to maintain that obstinance.

And so that’s that.  Matt Harvey will never wear a New York Mets uniform again.  This team gave him every opportunity to succeed, and he failed.  He was all about the big paycheck, all about hitting free agency and landing that massive contract.  Even in his walk year, he couldn’t produce.  Maybe it’s a physical problem; those two surgeries are no joke.  Maybe he was done with the Mets and didn’t want to be here anymore.  Irregardless, in the most important season of his career, he showed zero signs of life through the first 6 weeks.

Matt Harvey died on the mound in the World Series in 2015.  I honestly believe that.  I think he’s physically and mentally very damaged goods.  At 29 years old, it’s tough to say if he’ll be able to be even part of who he used to be.  Gun to head I think he’ll be an average starter for the rest of his career, however long that may be.  He was about average with the Mets in terms of wins and losses (34-37) though his numbers are misleading and fail to tell the story, clearly.

Ultimately, Matt Harvey needs a change of scenery.  I don’t know who needed this break up more, Harvey or the Mets.  It is such a relief to not have to deal with this guy anymore.  I defended him for a while but eventually I had to cut the cord.  Some people are still trying to defend him though I can’t imagine why.  We all wanted to root for him.  We wanted the Dark Knight, we deserved it.  But we ended up with headaches and drama over and over again.  It’s a weight off the shoulders of this franchise and fanbase.  The rise and fall were about equal I guess in Queens.  But in a city where everything is critiqued under a microscope, on a team that’s desperate for a championship, and in sports in general, it always comes down to “what have you done for me lately?”

I could go on and on, but it’s better off to cut ties here, no different from the timely separation from Matt Harvey.

UPDATE:  Cincinnati it is for Matthew.  Wonder if the club scene is litty in Cinci LOL.

I Met Mr. Feeny On Friday

Matt Harvey Is Being A Little Bitch