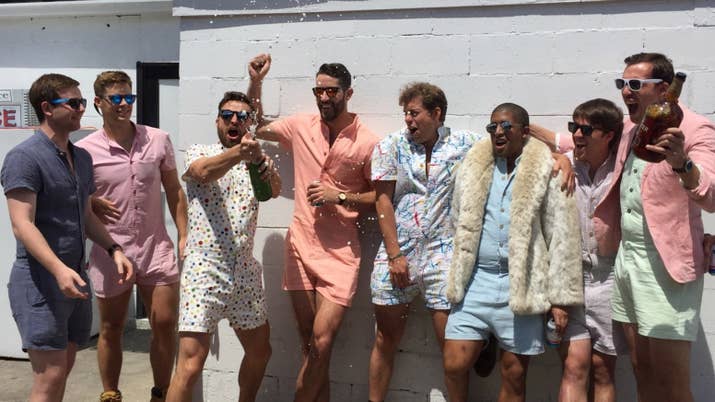 Male rompers aka Mompers aka Romphims are going to be a thing.  You don’t have to agree with it, but the sooner you accept it, the sooner you can continue living that thing you call “life”.  The news broke Monday in the form of a Kickstarter campaign, one which has now far exceeded its financial goal.  The header picture of a group of bros unapologetically celebrating good vibes in jubilance and in rompers has since gone viral.  Twitter erupted and gave us one of the best Twitter days in a long, long time.  Let’s check out the highlights.

Her: "How much you pay for your romper"

When u tryin on rompers at the mall and yo girl be like “come out and let me see” pic.twitter.com/D1BswFh8qu

me @ Urban Outfitters asking associates where the rompers at pic.twitter.com/u6C1GOKwxx

After sex and she just throws your romper over to you and says "your uber here" pic.twitter.com/PCUsyXQaeD

Peelin my man out of his romper this summer like pic.twitter.com/8hS36ehRtG

Me: "you smugglin cakes in them shorts Lil Daddy. " https://t.co/Ajl9jRBWDh

"Romper mean my guy"
"Yours fire too g"

Trying to get home to poop in my romper like pic.twitter.com/atT9ITsqoI

When y'all about to go out in the same romper. pic.twitter.com/jyI63WMPeK

when women follow you to your car after the club like "Lil daddy in the romper, what you getting into?" pic.twitter.com/l8djSx6WfU

Pull up on her like this in the romphim and now she moist without a choice. pic.twitter.com/lc8XaQ5CKi

If you honestly think I'm about to step out the house in a fuckin ROMPER you are absolutely correct https://t.co/AOGnVRclwS

Ladies $10 at the door. Men free with Rompers.

Anyone who’s obstinate about using Twitter is a fucking idiot.

Man oh man Twitter was funny yesterday.  It’s times like these where I feel that Twitter may actually last.  Most likely not, but Romper Twitter is helping the cause one meme, one joke, and one insecure man at a time.  Which brings me to my own opinion on the Romphims.  I don’t hate them.  In fact, I think they look good.  I’ll admit that they’re a bit over the top, but I’ve never been one to shy away from a little panache.  Every event is a fashion contest as far as I’m concerned, and if nobody’s talking about your outfit, then your outfit is plain jane.

I heard someone say yesterday if these were invented before women’s rompers, then they’d be a huge trend and nobody would have had an issue with it.  That’s a fact albeit a hypothetical one.  But because rompers have been a female trend up to this point, much of the male population has labeled this future trend as “taboo”.  The reasons as to why most don’t like them vary.  It’s almost certainly an insecurity thing because if you’re afraid to wear something it’s only because you take too much stock into outsiders’ opinions which is some pussy shit.  But they look super comfy.  The summer is made for light, airy clothes, and bright colors.  If you can add the option of unbuttoning the shirt, then it’s a real winner.  And the romphim checks off all boxes.

I was and am apprehensive about a few aspects, the main one being the process of going to the bathroom.  Everyone knows that girls who wear rompers complain that in order to go to the bathroom they need to essentially get butt naked.  If I have to get butt naked, this becomes unwearable.  Emptying the tank as a man is quick, seamless, and convenient.  If I have to completely disrobe, that changes everything.  But the unofficial word is that there’s a zipper like any other pair of pants/shorts.  Boom, crisis averted.

Another fear of mine is my physique.  I cannot confidently say that my body is conducive to sporting a romphim down by the beach and at BBQs this summer.  With that being said, I cannot say that I won’t do that exactly.  I have big thighs.  I think they’re good, strong legs.  But there’s no denying that they’re super white.  If I can manage to get some color prior to popping my romphim cherry, we may be in business.

In summation, I like the idea of the man romper.  Whether or not I’ll be able to pull it off and work it into my repertoire remains to be seen.  Time will tell.  My body will make the ultimate decision.  And if I have to show a little ass in the process, so be it.

Weekly Mets Check In: This Is A Bad Baseball Team